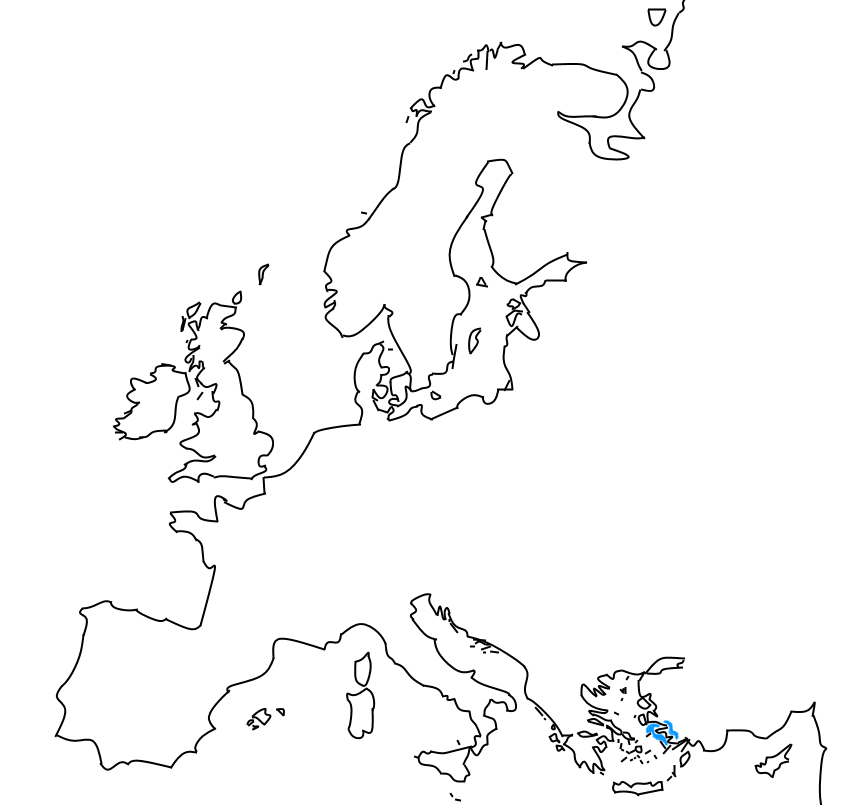 European sea bass (Dicentrarchus labrax) and sea bream (Sparus aurata) are the two most widely and intensively cultured marine finfish in the Mediterranean.CERES researchers investigated whether climate change would affect the typical fish farm in the eastern mediterranean.

They found that while the current path of climate change might offer some minor benefits, farmers will need to spend more money protecting their farms from increased storms and changes in water chemistry. 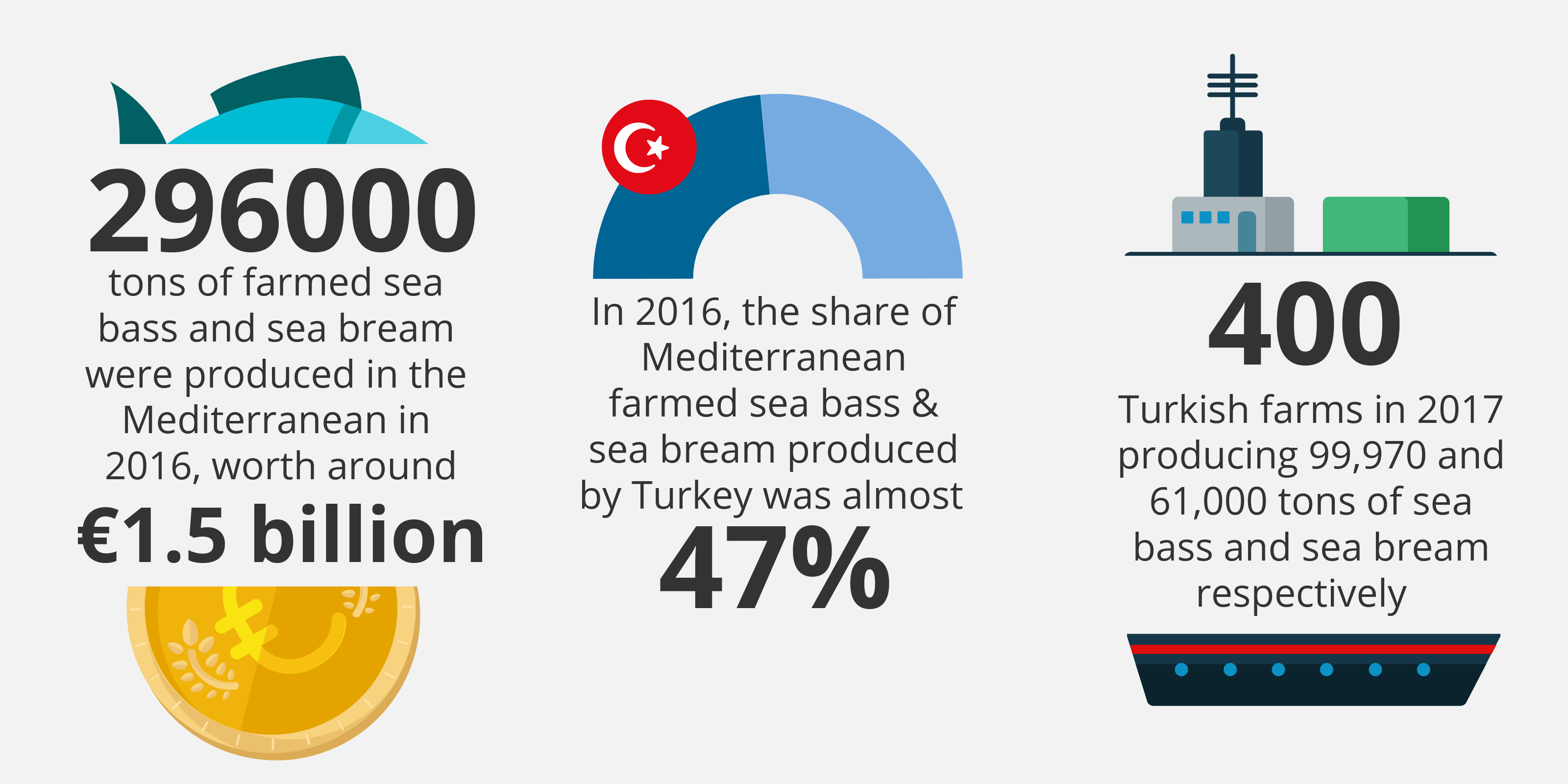 Sea bass and sea bream are usually farmed in the Mediterranean in off-shore or semi-offshore cages.

These operations are vulnerable to storms, sea level rise and more frequent storms, floods, and drought.

Climate-driven warming may cause increased demands for oxygen by fish, eutrophication, harmful algal blooms, and outbreaks of diseases and parasites.

These would not only affect the farmed species, but also cause fish farmers to struggle to run their farms.

Since Turkish sea bass and sea bream farms are located along the Turkish Aegean and at the intersection of the Aegean and Mediterranean Sea, nearly all work within CERES focused on Muğla and İzmir provinces. 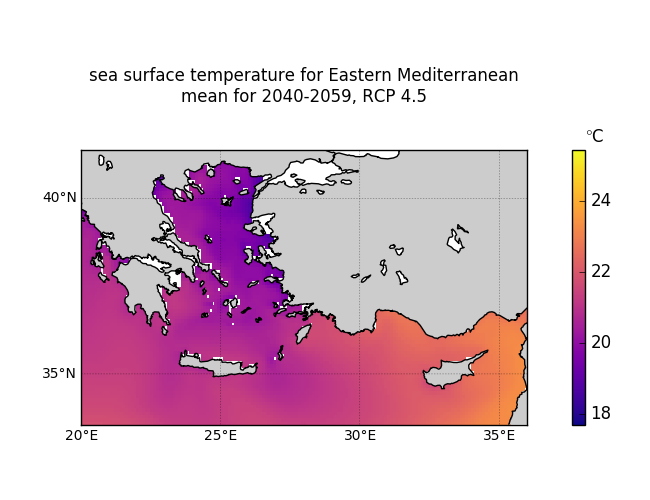 CERES researchers first needed to get an idea of what a ‘typical’ sea bass farm in western Turkey looks like. This involved collecting culture practice data from six farms throughout three Turkish provinces.

All this data lead to an algorithm that was able to predict the weight of fish come harvest time.

The researchers also used an algorithm developed by Aquafish to see how sea bass and sea bream would grow when different factors of their environment were changed.

With an accurate algorithm developed, researchers were able to look at how sea bass and sea bream would manage depending on the changes in their environment.

The factors they looked at were:

Researchers used two of our imagined scenarios about how climate change could happen, and how it would affect water temperature

When surveyed, fish farmers believed that all these changes would lead to them spending more to fight the effects of climate change. These higher production costs could lead to lower profitability of marine cage farms.

Based on growth patterns, structure and market dynamics in Turkish marine aquaculture over the past few decades, stakeholders from the Turkish aquaculture sector identified ‘World Markets’ (RCP 8.5, SSP5) as the most likely future pathway of the four CERES socio-political scenarios.

Most of the stakeholders surveyed by CERES in Turkey believed several areas will be damaged such as the how efficiently fish use animal feed, health, survival rate and production costs, will be negatively affected by climate change (Rad et al. 2018).

Those surveyed in the sector also believe that existing, off-shore technology will not be strong enough to resist the stronger storms, currents, and waves that may exist in the future. They think more resistant mooring systems must be developed, though the more frequent extreme climatic events will nonetheless cause stress and higher mortality rates in farmed species.

Aquatic animal diseases will be at the top of the agenda of farm managers in the future. Turkish marine aquaculture stakeholders also believe that, as wild marine stocks decline, the availability of pelagic fish for fishmeal production will be problematic resulting in higher feed costs and, hence, higher fish productions costs.

In the low emission scenario:

Greater temperatures in the near-future lead to bigger animals at harvest, and therefore greater profits.

However in the far-future this trend stagnates, and the farmer can have similar or much lower benefits than in the near-future.

Under the high emission scenario:

There’s a wider range of harvest weights and profits as years go by.

In both near and far future the farmer will have the chance to get bigger or smaller animals than at present, and thus greater or lower benefits.

Over time, the animal needs more feed to grow and the feed costs are thus greater. This is especially important in the high emission scenario and is responsible of the low profits obtained.

Due to the effect of temperature on fish catabolism, the oxygen depletion in the cages will be more severe as time progresses. This is important because a too low dissolved concentration might affect the physiological status of sea bass and impede growth.

Based on 2016 figures in a typical Turkish seabream and seabass farm, feed costs make up 66% of total costs, stocking is about 12% and the rest is allocated to other operational costs. Market returns are between €0.89 and €1.12 per kg fish and under present conditions the farm is profitable over the long term. Future profitability is calculated by taking into account feed conversion ratio and total harvestable biomass under RCP 4.5 & 8.5 environmental conditions from physiological models (WP 3) as well as literature projection ranges of energy prices (fuel, electricity) fish prices and fish feed price assumptions. The latter will be based on a combination of different feed component prices (e.g. of agricultural products) from literature and the output of the global fishmeal and fish oil model (Genevier et al. 2018).

The future profitability for typical farms is presented in operating earnings, which are the returns minus cash costs without interests. The latter include all fixed and variable costs. Depreciation and opportunity costs are not included within this “short-term profitability without considering interests”. In table 2 you can find the operative earnings for the current year (2016) and in 2050 under all 4 CERES scenarios and the respective P10 and P90 temperatures of the biological model.