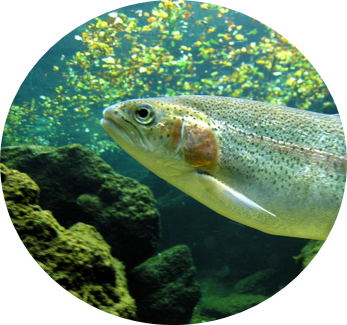 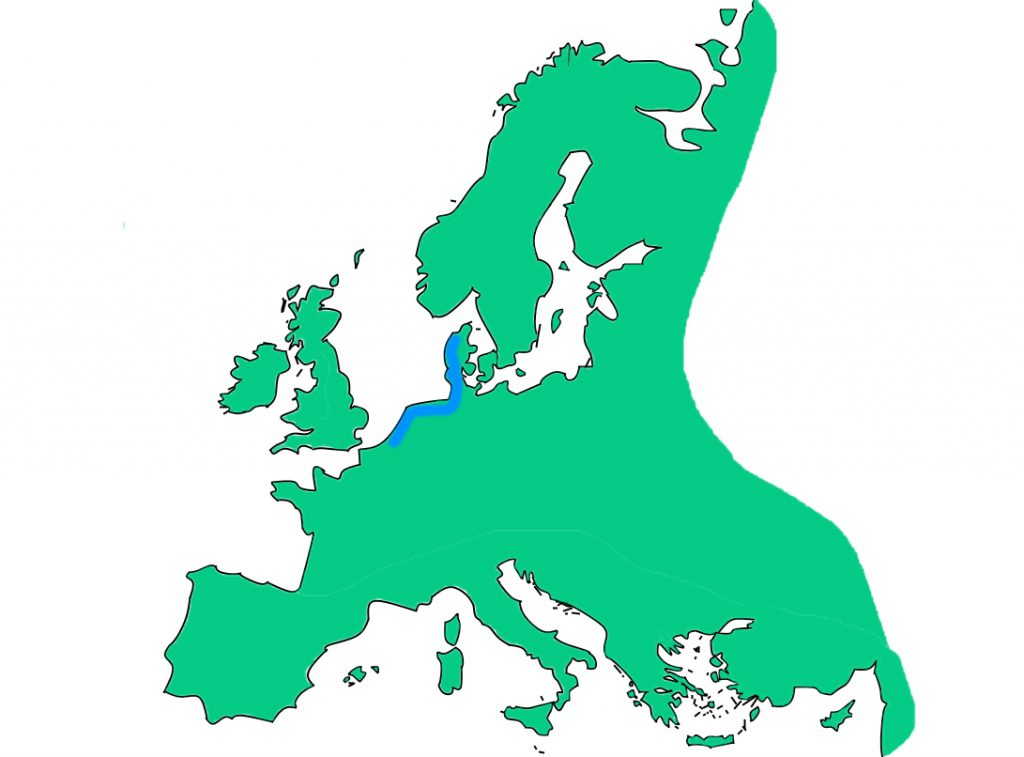 Rainbow trout (Oncoryhnchus mykiss) is one of the most widely-introduced species worldwide. It was introduced to European countries from the USA during the end of the 19th century, which was then followed by transfers within Europe.

Rainbow trout is now the most produced aquaculture finfish in the EU, in both volume and total value. Growing best at around 9-20°C, they are raised in places such as earthen and concrete ponds, raceways, net cages and recirculation aquaculture systems.

In Denmark, England, and Germany, most common production is ‘portion-sized’ trout in small farms, often depending on local markets and tradition. 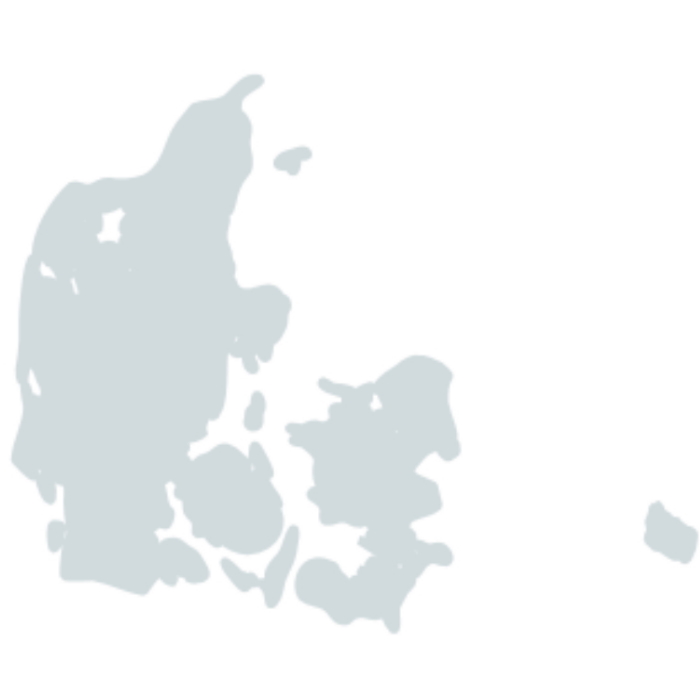 is the most important trout exporter within the EU. In 2016 the country produced 20,970 tons of portion-sized trout with a value of €63.2 million. The trout sector consists of 190 inland trout farms, located predominantly in mid-Jutland and in southern Denmark. The main export market is the EU, particularly Germany 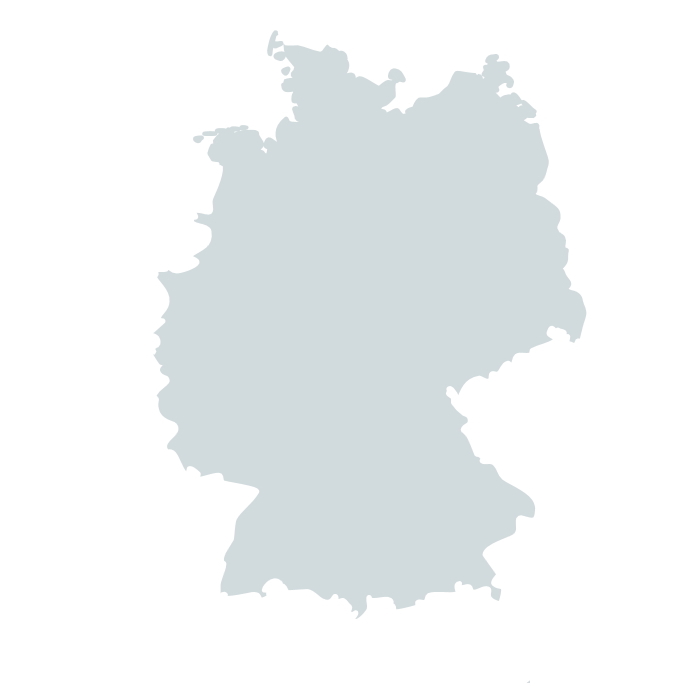 produced 7,039 tons of rainbow trout in 2016, valued at €39 million and is the main EU importer of trout. The main domestic production occurs in the southern states of Bavaria and Baden-Württemberg 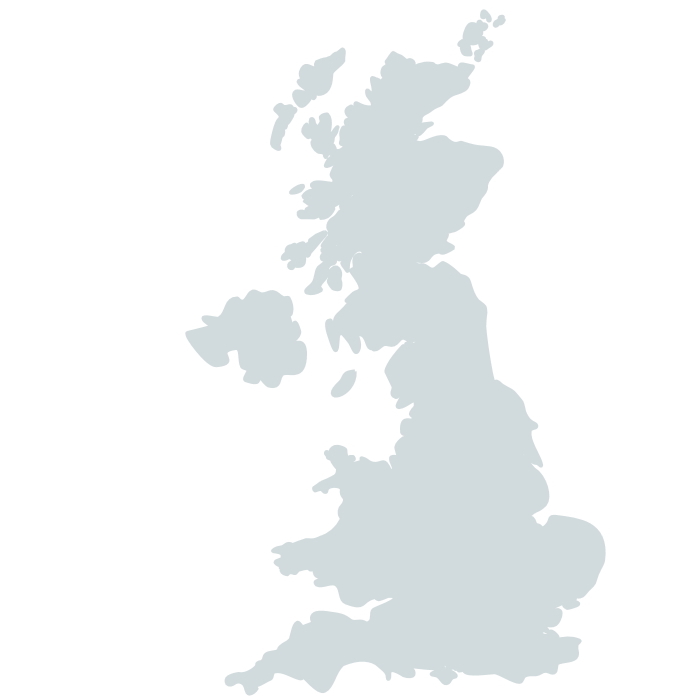 has maintained its annual production of 12,000 – 17,000 tons over the past two decades. England alone produced 4,852 tons in 2016 with a value of €19.5 million. Two-thirds of UK trout produced is sold domestically; demand for imported trout is low

What we expect to happen under climate change

Some regions will experience different changes of temperature. These changes, which could be even more intense as seasons change, will directly affect rainbow trout production. 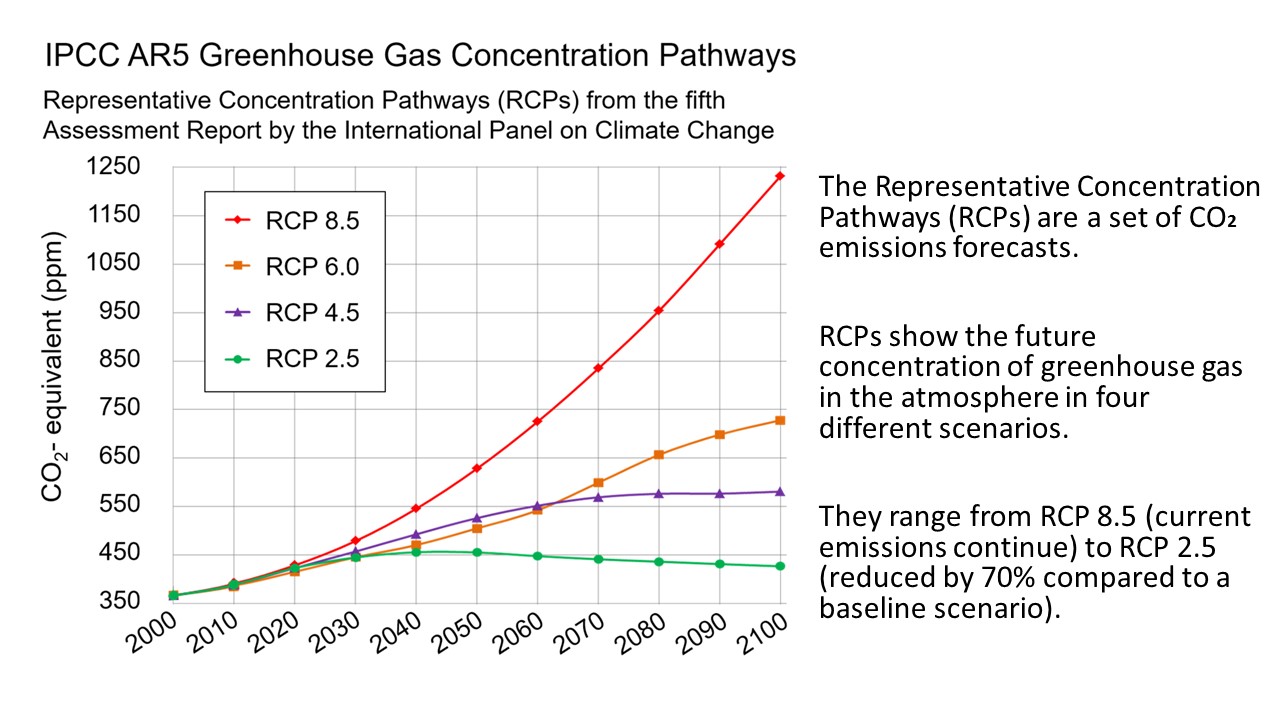 the greatest water temperature increases are expected in southern, western and eastern regions, increasing by 1.2% under RCP 4.5 and 5% under RCP 8.5 during summer months. As a consequence, temperature suitability, according to optimal growing temperature of rainbow trout, will decrease for the south east.

is expected to experience higher summer temperatures of 4.3% (under RCP 4.5) and 7.9% (RCP 8.5) respectively within Bavaria and Baden-Württemberg. This will lower their trout-growing suitability under RCP 8.5.

projections suggest that there will be less variation between different producing regions. No change in temperature suitability was predicted based on annual proportion of days within the optimal temperature range for trout. But it has to be kept in mind that peak temperature development is a very important factor as well.

Denmark is also likely to see increases in summer precipitation under RCP 8.5 in 2050, but there is likely to be a small reduction in summer rainfall in the UK and Germany under this scenario.

More local projections for RCP 8.5 and similar scenarios) show that the south of Germany (Bavaria and Baden-Württemberg) will have more extreme regional variation in rainfall pattern predictions than the those discussed above.

Mid-century projections show river flow rates decreasing by up to 10% in Denmark. Conversely an increase of up to > 10% is predicted for eastern and coastal Germany, with both changes higher under the high-emissions RCP 8.5 scenario. Projections for England show decreasing flow under the moderate-emissions RCP 4.5 scenario but increasing under RCP 8.518.

Note: The projections should be considered to have high uncertainty.

CERES researchers analysed the future profitability of trout farming in the UK, Germany, and Denmark using these RCP scenarios.

With these objectives in mind, researchers did the following: 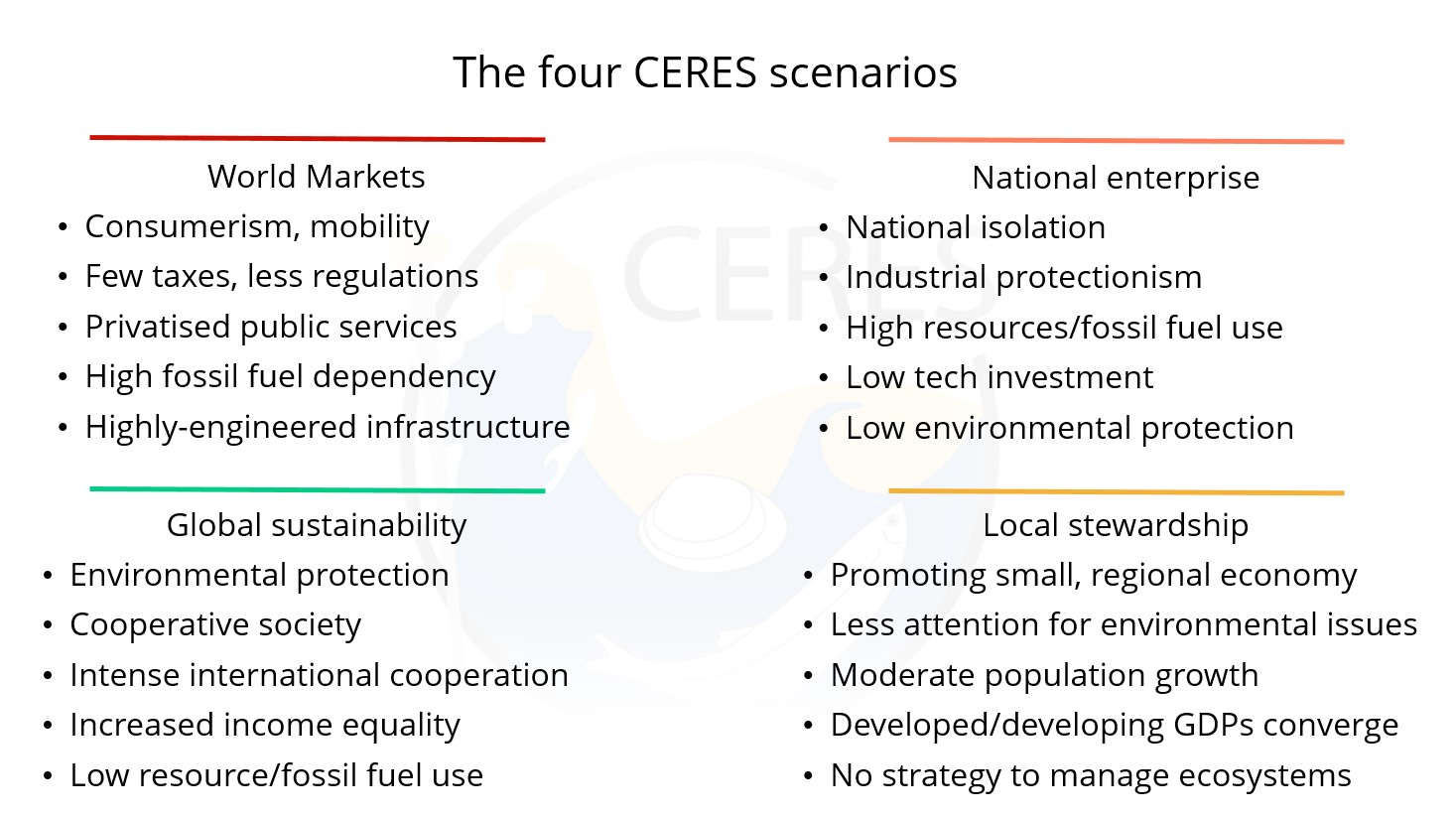 In the medium-term (2040-59), suitable habitats and seasonal windows for several diseases and pathogens known to impact European trout farms (e.g. furunculosis) are projected to increase across Germany, Denmark and England.

Some pathogens are expected to be more suitable to temperatures associated with RCP 4.5 in the year 2050 (e.g. infectious hematopoietic necrosis suitability across the UK). Others show the greatest suitability under RCP 8.5 (e.g. proliferative kidney disease suitability across Germany).

However, there are exceptions.

Despite such decreases, the new environment will remain suitable for some and the potential for infections persists. If the environmental changes also impair fish health, the risk would be magnified.

In the event of decreasing oxygen levels, extreme precipitation events and general thermal stress, cultured finfish are known to become more susceptible to the diseases and pathogens discussed above and the potential future distributions of pathogens will dictate the impacts and management to trout farms across Europe. 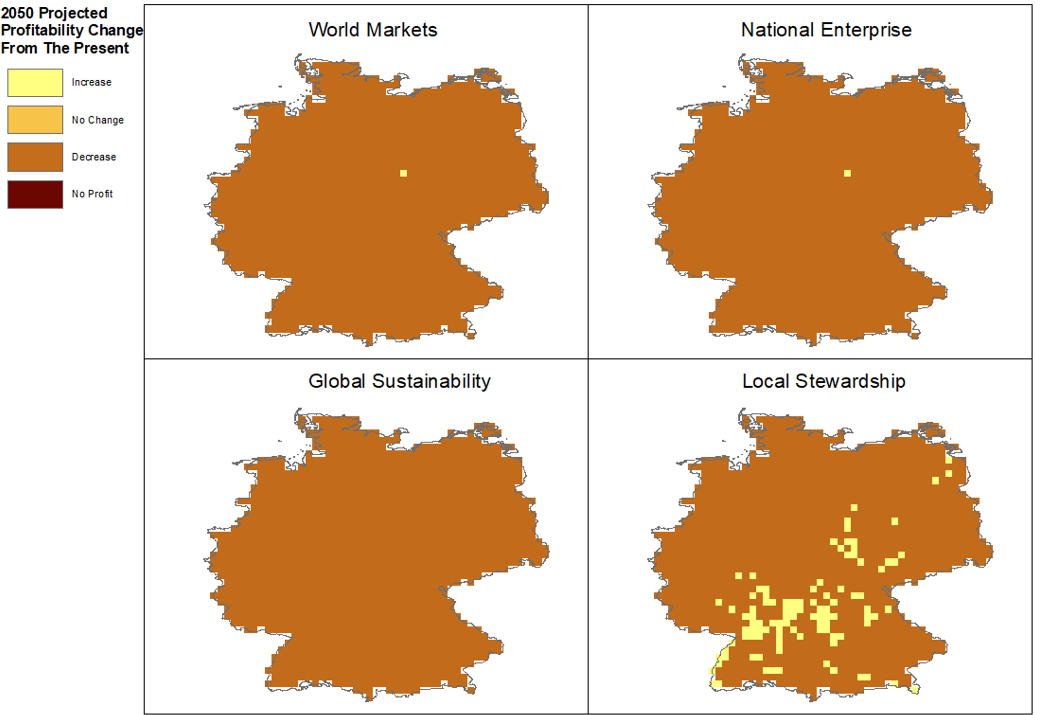 Future profitability is dependent on the profit margin and model predictions suggest that the Global sustainability  scenario (a global and green RCP 4.5 scenario) will result in the least profitability of the four modelled scenarios.

Farms with a profit margin around 20% are still profitable under all scenarios, although operating earnings under the Global Sustainability (GS) Scenario are already quite small.

Predictions averaged across the trout sector as a whole show that overall cash costs will increase more than returns under all four CERES scenarios leading to reduced profitability in the future.

Taking the results one step further and including information on future temperature suitability and disease risk to include a spatial component, by placing the typical farms across their original countries the most and least suitable regions can be identified.

Expected changes in precipitation and an increase in surface water temperature for NW Europe are pushing towards or exceeding the thresholds for water temperature and the quality of rainbow trout.  This means a decline in fish health and potentially reduced survival. This will damage rainbow trout production.

Increased winter rainfall and regional increase in river flow could cause an increased frequency of flooding and damaging farms. Adaptation measures will increase operational costs (e.g. energy costs to increase aeration) and, if these measures are not sufficient or exceed profit, relocation of aquaculture with reduced local employment could be the consequence.

Mitigation measure options from governmental site include subsidies to enable the adoption of new technologies to overcome increased droughts, floods and/or decreased water quality. In case that physiological thresholds of the cold water species rainbow trout are exceeded alternative rainbow trout strains, e.g. selected for higher thermal tolerance could be an option. 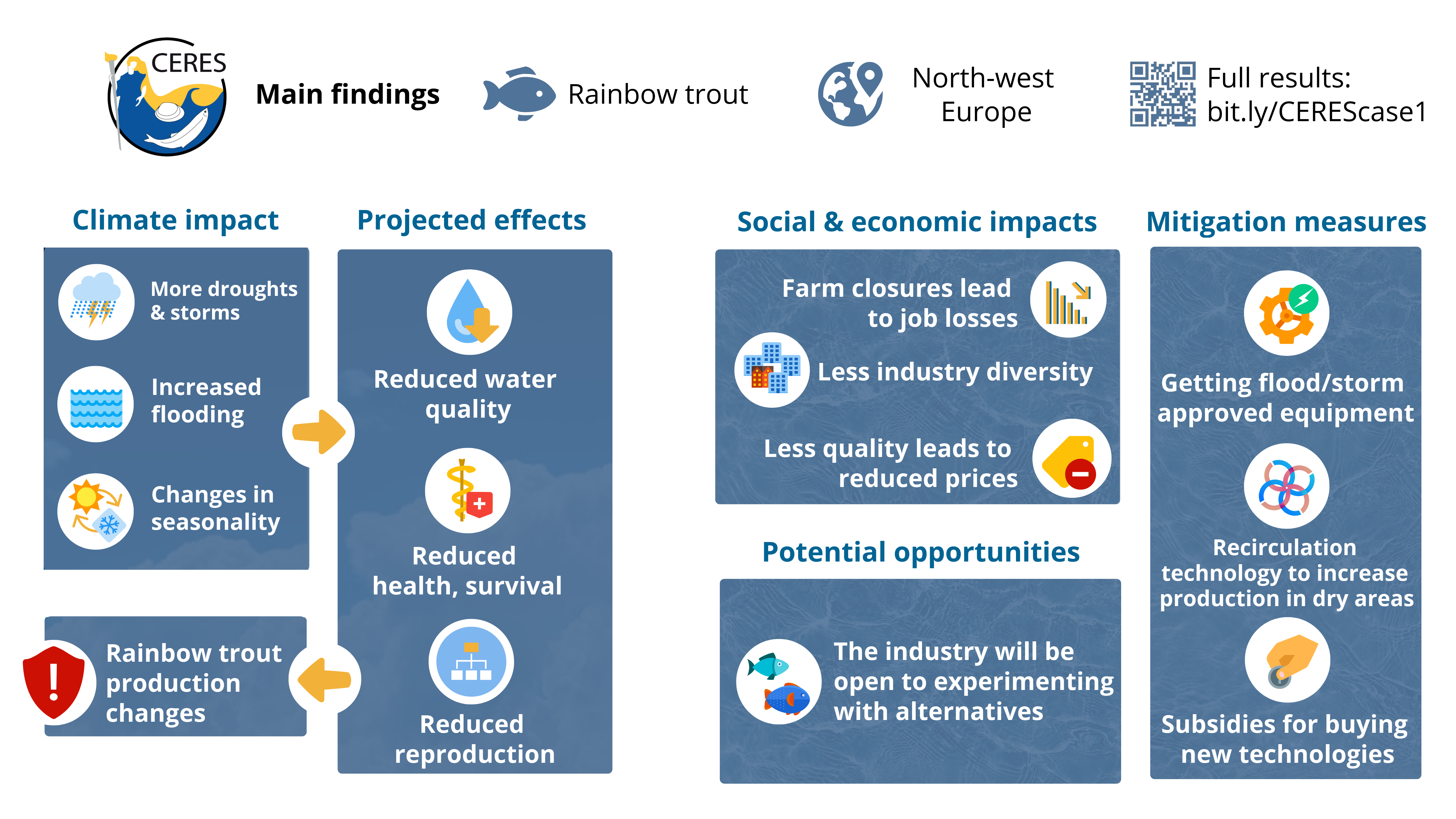